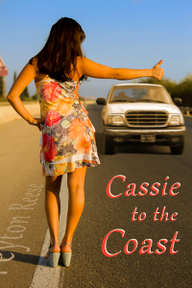 Cassie to the Coast is a present-day love story set in Oregon, USA.

Advisory: Due to some coarse language and some adult subject matter, this book is recommended for ages 16 and older.

You can read a sample of Cassie to the Coast below, and purchase an electronic version fromThe ePub file should work on most non-Kindle readers.

Cassie to the Coast is also available in print:
If you enjoy the story, I would really appreciate it if you would post a review on the site from which you downloaded the book. Thank you! - Peyton
Sample 1:

I was in line to get through the four-way stop in Dundee, a little wine-tourism town between Portland and the coast. After that intersection it would be smooth sailing to Lincoln City, if your idea of smooth sailing is 55 miles an hour for the next hour, in an endless line of vacationers. With three cars ahead of me at the intersection, I spotted this couple standing at the corner, a guy and a girl, him with curly brown hair gathered in a ponytail and toting a backpack and with his thumb stuck out, and her, short blondish hair hanging under a baseball cap, holding a piece of cardboard by her side. I figured that brown cardboard had their destination written on it, but she’s wasn’t showing it, she was just watching the cars, or more precisely, she was looking in through the window of each car, checking out each driver.

Fine. Two kids headed for the coast, I figured. Nothing unusual, and nothing to do with me. Even when the girl turned to look at me and looked straight through the windshield of my pickup and into my eyes, it meant nothing, and anyway it’s not like we really made eye contact, because I couldn’t see her eyes in the shadow of her ball cap.

The car ahead of me, a Buick, rolled up to the stop sign, and the guy inside motioned to them, beckoning them to his car. The kid with the ponytail started toward him, but the girl reached for his arm and pulled him back. She waved the Buick through  – just waved him through with a languid sweep of her cardboard sign.

Okay, so she didn’t like the looks of Mr. Buick. Fine. I’m all okay with being careful. Hitchhiking in Oregon is not a problem most of the time, but you can’t be too careful, and sometimes you gotta trust your instincts.

So it was my turn at the stop sign, and I turned my eyes on the girl again, because I’m single and that’s what guys do, okay? So sue me. Anyway, I looked at this girl, and there was enough light under her cap now, and I could see she’s looking right at me, inspecting me, and she held up her brown cardboard sign for me, and it says “Ride” in big, friendly, red magic marker letters. That’s all, just “Ride.”

I made my obligatory stop and went on through and I thought to myself, She didn’t like the guy ahead of me, and for some reason I passed inspection, and Mr. Ponytail didn’t look dangerous, he looked more like a tofu-and-hummus kind of guy, which we got a lot of up here in Oregon, and they needed a ride, so I pulled to the shoulder in front of a former gas station turned coffee bar and put the shifter in neutral and turned around to see if they’re coming. Well, she’d picked up the cloth bag that was laying at her feet and she was running across the intersection and he was running to catch up to her. I reached across the cab to unlatch the door for them and she pulled it open and climbed in and he followed and pulled it shut and he said, “Thank you, man! Blessings on you for picking us up,” and he started to buckle up.

“No problem,” I said automatically, but what I was really thinking was, if we’re going to get anywhere I need room to shift the the gears, because this truck’s got a floor shift, and the girl’s legs were in the way, and she was wearing a knee-length summer print dress, and how do I politely ask her to move her knees out of the way of my stick shift?

She saw my hand reaching for the shifter, and she turned her head toward me and looked into my eyes and I looked into hers. Hazel! Nice.
...
Sample 2:

Cassandra, next to me, muttered something in her sleep. Whatever she was dreaming, it wasn’t good. A second later she shouted “No!” and sat half upright.

She blinked and looked around and saw me. Her cap had fallen off while she slept, and her hair looked kind of wild and she seemed a little disoriented. She looked kind of cute that way. I smiled.

She grabbed the rear-view mirror and twisted it to look into it, then ran her fingers through her hair until it was mostly orderly, and then she found her cap and jammed it back onto her head. “Seen enough?” she challenged.

No. I guess she didn’t like being caught with her guard down.

I did notice, though, as she was straightening her hair, that her left ear had about six piercings, but only the bottom one had an earring in it. I wondered if she lost the others, or if she’d outgrown them.

To put her at ease, or to start a conversation or something, I asked, “You have a bad dream?”

She looked at me, trying to decide if she should answer, I guess, then she said “Yeah,” and turned her attention out the right-side window, to shut me out.

We were following a motor home down a winding section of roadway, again not unusual for the coast range. After a bit, she turned to me and said, “Do you ever dream about dying?”

She looked out the front window. “Yeah. All the time.” There was a pause, and then she added, “I don’t sleep so good.”

She didn’t elaborate. I wondered, What am I, a magnet for nuts or something? Some guys are chick magnets, I’m a nut magnet.

She turned to look at me, then she pulled her arm out from her shoulder belt and slowly reached over and put her fingers on my chest, right over my heart, and then she pressed her whole hand flat onto me. I glanced down as she did this, but I said nothing. Then she took her hand away slowly and closed her fingers as if she wanted to not lose something. Then she asked, “If you were going to die, would you want to be warned ahead of time?”

“Well, yeah, sure. Then I could do something about it, so that it wouldn’t happen.”

“So then, something you would do would prevent you from dying, at least in that way, and you would live longer, and later die some other way. Because all of us, all of us are going to die some day.”

I glanced at her. Oh, great. Nuttier and nuttier.

She was looking right at me when I thought this, and I hoped she couldn’t see what I was thinking.